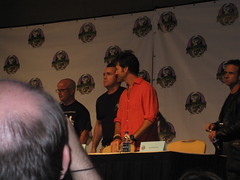 1. For those of you who knew about my doctor's appointment, but that I didn't catch up with in person yesterday -- good news. The specialist doesn't think the condition is degenerative. He said to keep an eye on it, make sure to get my eyes checked regularly, maybe take a multivitamin that's specifically related to eye health, but that he doesn't expect it to affect my vision anytime soon. He said I just come with funny retinas. *g* So, not going blind, yay!

2. I have a new homebase. I've imported this journal over there, and will probably keep this one for ease of commenting and lj friendslist purposes and whatnot, but updates are more likely to happen there.

3. Updates will happen! Srsly. But not this weekend, as I'm going to a festival in VA for the weekend.

So as many of you have noticed, the entire Gatefiction domain seems to be gone, and I haven't been able to get hold of my host there. I hung out a while hoping it was a glitch that would be repaired, but...it hasn't been, and I have like 70-something stories that existed there and nowhere else.

Anybody have a little corner of space they'd like for me to have for my new internet homestead? I dislike and distrust free web hosting operations, for aesthetic reasons as well as the inevitable concerns about unfanfriendliness. I would even repay you in fic. Oh, and eternal gratitude, naturally -- but also fic!

And when she says she won't blink, that means something.

Need more reasons to loathe Sarah Palin? Of course you don't! But anyway, I try to get the word around when I encounter yet another creepy underground manifestation of psychotic Dominionist conspiracies: your concise guide to Third Wave Christianity, now with still more spiritual warfare! This time, instead of all non-evangelical Christians in general, they hate me in particular, which always just makes it feel more special.

A takeaway quote, for those of you who don't click links. This is Ana Mendez, who helped organize a Third Wave "prayer expedition" to the top of Mt. Everest, which she credits with causing a major avalanche. This sounds kind of bad and scary to you and me, but apparently it took out the prayer flags that people of other religions traditionally leave on Everest, so I guess that was the point? Seems excessive, but you know how God likes the grand gesture, except when He doesn't. Anyway, Ana Mendez:

"Since then, we have seen millions come to faith in Asia. ... Within two weeks of the expedition, other things happened which I believe are also connected: the huge fire in Indonesia, the largest Muslim nation; an earthquake destroyed the basilica of Assisi, where the Pope had called a meeting of all world religions; a hurricane destroyed the infamous temple 'Baal-Christ' in Acapulco, Mexico [btw, that place is so famous that when I Googled it, eleven hits came up, all in reference to this quote; does anyone know where the hell she's talking about?]; Princess Diana died, a representative of the British throne, to which Sir Edmund Hillary dedicated Mount Everest; and Mother Theresa died in India, one of the most famous advocates of Mary as Co-Redeemer."

Dead infidels for the scorecard, yay! This is the kind of thing that makes me want to literally spit in the face of everyone who tells me that the problem with us liberals is that we endorse a "culture of Death" rather than the conservative Christian "culture of Life."

Not that I particularly want to get into a dick-slapping contest with these people, but honestly? If they decide their grand hobbyhorse needs to be this "confronting the Queen of Heaven" business, then you know what, good fucking luck to them. They're not the first to try it, and as they've noticed, She's still here. These fringe-of-the-fringe wackjobs think they can pray down Oya and Oshun and Yemaya -- Diana and Demeter and Athene -- Durga and Laksmi and Kali -- Kwan Yin and Ameterasu and Tara -- Hathor and Isis and Innana -- Freyja and Brigid and the Morrighan -- Sophia and Shekinah and Sancta Maria herself? Knock yourselves out, y'all. Seriously, you do not scare me on the spiritual front -- only at the polls.

excerpt from a recent interview posted at Gateworld:

Momoa went on to reveal how he would like Dex to exit the show -- and in his mind he may take his co-star with him. "A blaze of glory, man," he said. "... me and Joe [Flanigan, Colonel John Sheppard], going out. The unspoken word, looking at each other.

"We've had it happen this year [in "Search and Rescue."], we do one where we look at each other and he's like, 'We're going to die. It's an honour,' and I'm like, 'Same.' It's unspoken and you're going out with your buddy, firing."

That's all I have to say about that. Welcome to the ship, Jason! Here's your secret decoder ring.

"Not every wrong, or even every violation of the law, is a crime."

YES, IT IS, MUKASEY, YOU EVIL PIECE OF SHIT. THAT IS EXACTLY WHAT THE WORD "CRIME" MEANS.

I don't know if I could really respond better than this to the latest salvo of unhinged homophobic batshittery from Orson Scott Card.

I remember reading the Memory of Earth series in college, back when it was even harder than it is now to find even vague references to homosexuality in genre fiction. One of the main characters was a gay man who married a woman because it was required of him, and I remember thinking it was just a really intelligent, poignant treatment of a character who had made this terrible choice between two mutually exclusive types of happiness. It's weird to look back now and realize that whole arc was not, as I believed at the time, *descriptive* of what it's like to live under enforced heteronormativity, but *prescriptive.* Card doesn't hate gay people; he just hates gay people who selfishly destroy civilization by refusing to enter heterosexual marriages and breed.

Oh, and by the way, the reason Card doesn't consider himself a homophobe is that he subscribes to a very specific definition of the word, where homophobia means a fear of homosexuality that is so crippling as to interfere with one's life. Well, I sort of think he's crossed that bridge now, since he's so terrified of teh gay conspiracy to destroy everything good and pure in lif that he can't think of any other recourse than civil war. That sort of seems like it's getting in the way of being, you know, a normal human being who doesn't want to incite civil wars? Oh, and also, a lot of his former fans now wouldn't buy one of his books if it came with a lifetime's supply of cool shoes and lubricant, so it's not been a great boon to his career, either.

So as part of this thing I'm doing where I try to get my life under some kind of control, I went and deleted all THIRTY SEVEN HUNDRED and change e-mails sitting in my inbox.

That's not like a joke, like when I say "There's thirty seven hundred mostly empty bottles of salad dressing in this refrigerator, OMG." That's a real number. Some of them I had read, some of them were comment notifications for things I'd already responded to. Many of them were things I hadn't read or answered, but you know, it was just at the point where I knew I wasn't going to, because facing that kind of backlog and going through it to separate out things that I need to respond to from things that I can let go from things that I should've responded to at the time but the moment has now passed -- that was just terrifying and depressing, and I knew I wasn't going to do it.

I know I suck at this stuff, Dear Readers, and I wish I were better at it. Like I said, I'm trying to organize my life a little differently and hopefully *be* better at it. Sometimes it's laziness or my desire to move onto the next shiny thing in my head. Sometimes it's the weird brand of social anxiety that I have where I actually get a little freaked out by comments and feedback and e-mail, because it's nice to know that people are listening, but then holy fucking God, people are listening and I periodically find that really intimidating and then I can't go near the whole thing until it wears off. Whatever the reason, it's obnoxious behavior, and I'm trying to cut down on it. Having a clean slate, I think, will help some.

So if you're one of the people who have been disappointed or insulted because you tried to contact me and I didn't respond, I apologize to you. My ability to deal with other human beings kind of runs in cycles, and I'm really sorry you got caught on a downward slope. Hopefully some of the stuff I'm trying to do differently now will result in some improvement to my ability to control those cycles.
Collapse